Centre for Research in Economics of Education 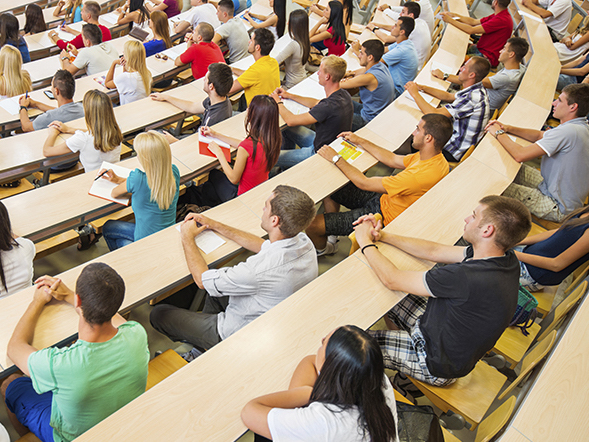 Decisions about admission to selective schools are usually based on performance measures. To meet the required performance threshold, students may seek additional resources such as private tutoring. In their new study, Maria Zumbuehl, Stefanie Hof, and Stefan Wolter examine how the use of tutoring is related to the likelihood of transitioning to an academically challenging secondary school and the likelihood of successfully completing that school. They find that students who received tutoring before the transition are more likely to fail in secondary school than students who had the same skill level without tutoring.

In a new article, Stefan Wolter, together with Stefan Denzler and Jens Ruhose, examines the impact of job-related CET on employment prospects in Switzerland. They find that participation in work-related continuous education increases annual earnings and reduces the risk of unemployment even two years after training. The returns are highest for middle-aged men with formal vocational training who work in either a depressed or a booming labour market.

Gender Differences in Vocational Interests and in Occupational Preferences

"Boys play with cars, girls play with dolls". It is interesting to see that a little later, the career choices of young women and men can be explained very well by the extent of interpersonal relationships or interactions with machines in an occupation. In the article published in the Journal of Economic Behaviour & Organization, Stefan Wolter together with Andreas Kuhn demonstrate this with innovative data sets.

Women and men differ in many ways, not least, as many years of research have shown, in their inclination to enter into competition. In the latest research paper published in the journal Experimental Economics, Stefan Wolter together with Thomas Buser and Noemi Peter, have analysed the consequences of this for educational decisions by comparing competitive women (men) with less competitive women (men) along the entire distribution of abilities.

Much ado about nothing?

In a recent working paper, Maurizio Strazzeri, Chantal Oggenfuss, and Stefan C. Wolter investigate the impact of a Swiss curriculum reform that introduced courses of a second foreign language in primary school on students' educational trajectories after compulsory school. The authors find that the reform does not affect the educational trajectories of the majority of the student population. However, the reform impedes low-track male students direct transition to upper secondary education. This effect is particularly pronounced for students who do not speak at home the school's language of instruction.

Does awareness of the risk of failure matter for educational choices?

A new paper published in the Economics of Education Review examines the effect of providing information about dropout risks on stated preferences for academic versus vocational education in Switzerland. In this work Stefan Wolter together with Maria Cattaneo find that the deterrent effect of a higher risk of dropping out is too small to achieve an efficient allocation of talents, if preferences for a particular type of education are very strong.

In their new article published in the Acta Politica, Aurélien Abrassart and Stefan C. Wolter analyse a survey of adults’ perception of the social prestige of occupations in Switzerland. They find respondents identifying with right-wing populist parties do not reject the dominant view of the prestige of occupations. Rather, adherence to radical political ideologies, whether at the far left or far right, correlates with a lower impact of the educational requirements of occupations on their perceived social prestige.

In a newspaper article in the NZZ (24.12.2021), Prof. Stefan C. Wolter, together with Prof. Conny Wunsch from the University of Basel, proposes that all students who complete a tertiary education in Switzerland should (subsequently) pay more for the costs incurred. (article in German as pdf attached)

A new study by Samuel Mühlemann and Stefan Wolter published in the Oxford Research Encyclopedias: Economics and Finance looks at the relationship between business cycles and the apprenticeships market in the interplay of demand, supply and other factors.

Too shocked to search

In a new research, published in the Swiss Journal of Economics and Statistics, Daniel Goller and Prof. Stefan Wolter examine the effects of the Corona pandemic on the search behaviour of potential apprentices for apprenticeship positions. The first shutdown from March 2020 led to 40% fewer searches, while the response to the second shutdown from December 2020 was more resistant, with only around 20% fewer searches.

Stefan Wolter was elected as a member of the COVID-19 Science Task Force.

Election as Chairman of the Board of Directors of the MEM-Passerelle 4.0 AG

Stefan Wolter was elected Chairman of the Board of Directors of the newly founded MEM-Passerelle 4.0 AG. 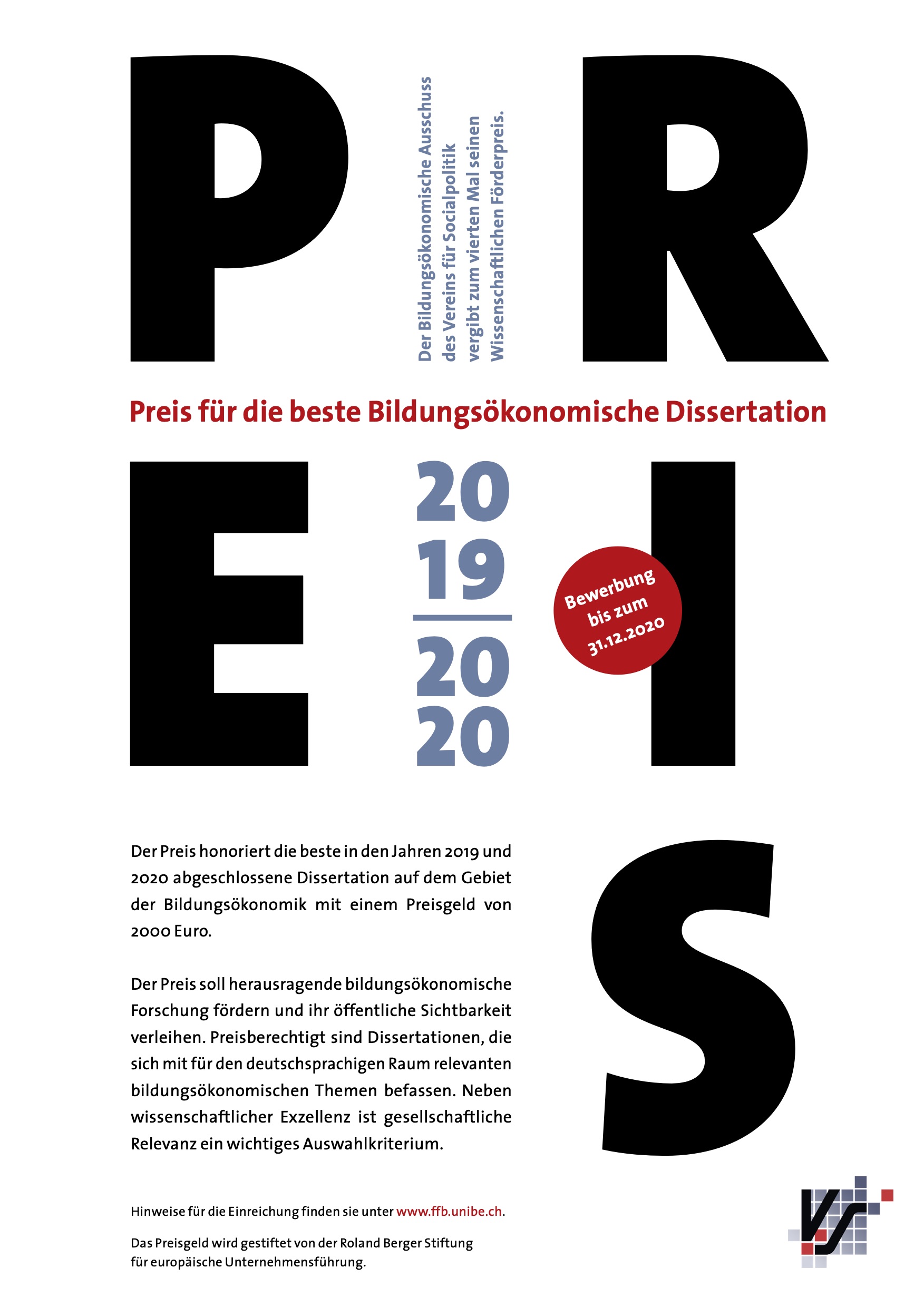 Call for applications: Prize for the best PhD thesis in Economics in Education 2019/20

The Economics of Education Committee of the Verein of Socialpolitik awards its Scientific Prize for the fourth time. The prize will reward the best PhD thesis completed in the years 2019 and 2020. The deadline for submission is December 31, 2020.

Everyone to the university - does that make sense?

In the context of the symposium "Wenn Begabung und Bildungswege abweichen: Verabschieden wir uns von der Leistungsgerechtigkeit" of the Academy of Sciences and Literature, Prof. Dr. Stefan Wolter gave a lecture on "All to the university - does it make sense?

Efficiency in the Swiss education system

Is the apprenticeship market resistant to economic cycles?

Is the apprenticeship market resistant to economic cycles? This question is a pressing one in view of the expected economic effects of the corona crisis. A recently published research paper by the Research Centre provides empirical answers to this question.

Elected as Chairman of the Committee of Economics of Education

Stefan Wolter has been elected new chairman of the Standing Field Committee of Economics of Education of the Verein für Socialpolitik and thus also member of the Executive Council of the German Economic Association. 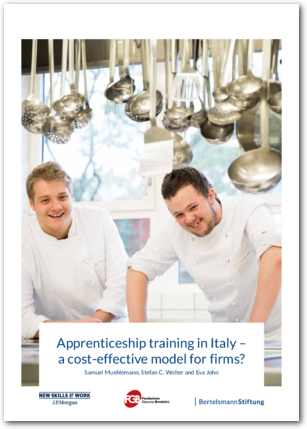 Report about apprenticeship training in Italy is forthcoming 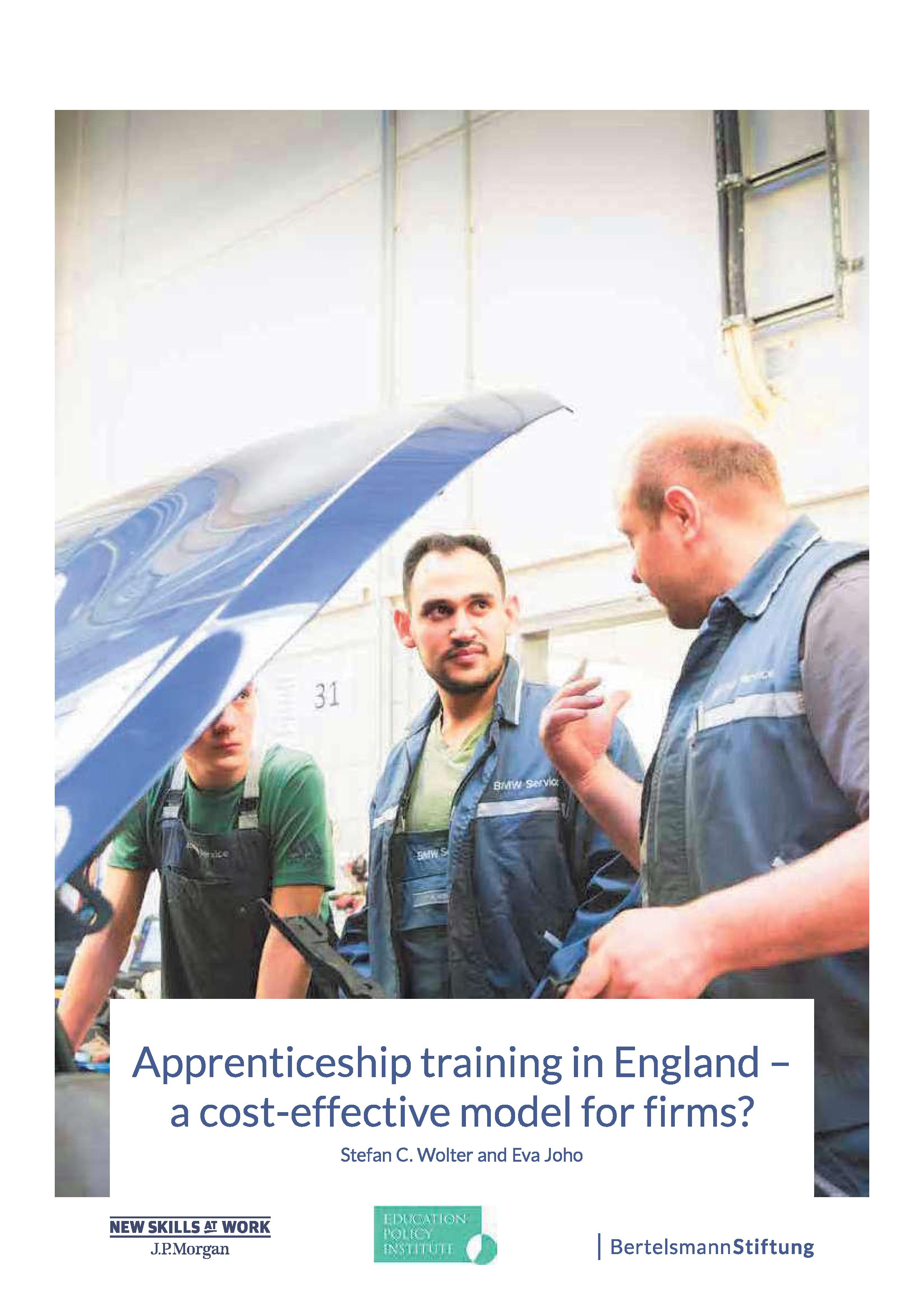 Report about apprenticeship training in England is forthcoming

The economic society of the canton of Bern has awarded the Schmeller Price to Luca Moretti – a former staff member of the Centre for Resarch in Economics of Education – for his master thesis. His work is incorporated into the Leading House Working Paper No. 137 on differences of firm’s costs and benefits of apprenticeship training in Austria and Switzerland. 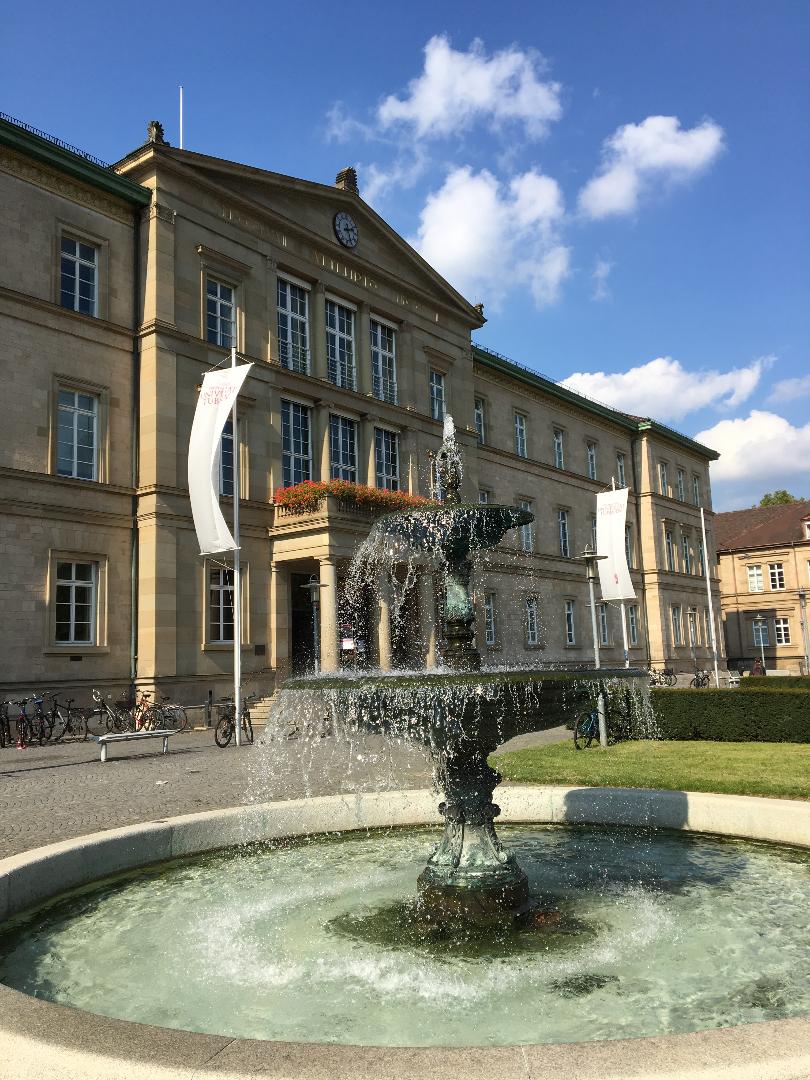 Keynote on STEM and gender

On the occasion of the 60th founding anniversary ceremony of the Institute for Applied Economic Research (IAW) at the University of Tübingen, Germany, Stefan Wolter held one of the two keynote lectures entitled:
"STEM and gender: or why is it so difficult to get girls into math-intensive careers?"

A roundtable with the King of the Belgians

In a round table, organised for a delegation headed by the King of the Belgians in Lucerne, Stefan Wolter informed about the Swiss vocational education system. King Philippe was accompanied by several ministers and the EC Commissioner for employment, social affairs, skills and labour mobility Marianne Thyssen.

Presentation at the University of Bath

Stefan Wolter was invited by the Economics Department to speak at the University of Bath about gender, competitiveness and career choices along the whole ability distribution.

The Best Paper Award of the 5th internationalen VET Congress

The paper "Public Attitudes Towards the Role of the State and the Private Provision of Training: Evidence from the Swiss Apprenticeship System“, written by Stefan Wolter, Andreas Kuhn and Jürg Schweri, has received the Best Paper Award of the 5th internationalen VET Congress of the SFIVET.

Elected as Chairman of the Committee of Economics of Education

Stefan Wolter has been elected new chairman of the Standing Field Committee of Economics of Education of the Verein für Socialpolitik and thus also member of the Executive Council of the German Economic Association.

Paper presented at the Annual Conference of the AEA in Chicago

In a new research paper Stefan Wolter and Katahrina Jaik (University of Zurich) show that interim solutions after compulsory education are not only a question of grades. Psychological factors are just as helpful or obstructive for the smooth transition from compulsory to secondary education.

15 years of research on costs and benefits of VET

Stefan Wolter held a keynote on research results from 15 years of research on costs and benefits of vocational education and training at the first Conference of the Centre for Vocational Education Research (CVER) at the London School of Economics.

Apprenticeship does not need subsidies

Stefan Wolter explained in an NZZ article why the financing of the Swiss apprenticeship training could serve as a model on the international level.

On June 6, 2016, in the radio programme Kontext (SRF2) about „Good enough is the new perfect“, Where does the pressure on our kids come from?, Stefan Wolter explained the dimension, the motivation for and the effects of private tutoring.

At the annual conference of the Presidents of Polytechnics Canada in Toronto, Stefan Wolter held a keynote on international developments in VET on 12 May, 2016.

Stefanie Hof and Stefan Wolter have written an analysis of the results of standard tests covering five years for the Department of Foreign Affairs, Education and Culture of the Principality of Liechtenstein.

At their eleventh meeting, the delegates of the OECD member states have reelected Prof. Dr. Stefan C. Wolter as President of the OECD Group of National Experts on Vocational Education & Training for another three years.